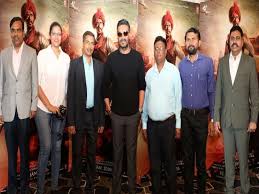 This unique alliance between the Directorate of Tourism and the historical periodic drama movie is aimed towards motivating people to remember the glories of warriors like Tanhaji.

Due to this association, the Directorate of Tourism is encouraging people to appreciate the ‘unsung’ beauty of the state. The association has also led to creating a co-branded TVC, which is being showcased across Cinema Advertising, TV and digital mediums.

The story of ‘Tanhaji’ revolves around Tanhaji’s attempts to recapture the Kondhana fortress after it was captured by Mughal emperor Aurangzeb, who entrusted his trusted guard Udaybhan Singh Rathore to protect it. After four days of release, the film has already made INR 70 crore in box office.

Dilip Gawade, Director, Tourism Directorate, Government of Maharashtra said that the heritage sites in the region are like fossils safeguarding the events of the state’s vast history. Like several other states that are historically and culturally rich in India, Maharashtra also has a vast array of forts like Sinhagadh, Sindhudurg, Raigad, Pratapgarh etc., which gives a glimpse of glorious past, Gawade added.

Gawade also mentioned that they have created a co-branded campaign with the movie to inspire people to know and visit historical locations in Maharashtra. He said that the department’s association with this film might prove to be a powerful tool for communicating these ideas to the public.