On the main avenues of Bangkok, traffic-free pedestrian zones have been reintroduced 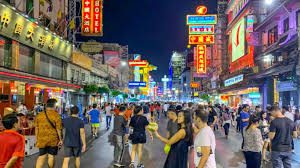 On main avenues of Bangkok, traffic-free pedestrian zones have been reintroduced. It remained suspended for about four years in expectation of reviving an economy hit by a tourist spending slowdown.

The tourism industry of Thailand has been negatively impacted by the slowdown of the world economy and a higher baht. In Bangkok, the number of street stalls has been decreasing as urbanization progressing at a fast pace. Providing a taste of Southeast Asian life, the reinstated pedestrian zones have proved to be quite well-liked with the tourists.

The Silom Road, situated in a busy business district, was cleared of the cars that created massive jam on the main avenue during the weekdays and was crowded with tourists on a Sunday last December. The street has several stalls on both the sides, set up close to each other. They sold local specialties including broiled chicken and noodle-based dishes.

On a makeshift stage, traditional dances and music were performed, giving the street a festival-like appearance.

A 28-year-old tourist from Hong Kong, named Alex, said the chance to taste lots of local foods was immensely satisfying, as he munched tropical fruits.

The pedestrian zones was opened in mid-December 2019, under the authorization of the Bangkok Metropolitan Administration, are marked out every weekend. A Chinatown and the Khao San Road, two much admired destinations for backpackers, are the other areas of the city that have been closed for the motor vehicles. The weekend pedestrian zones will continue until May.