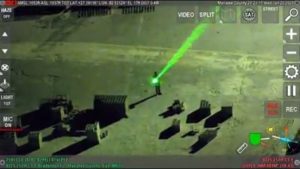 After a laser was directly pointed in a pilot’s eye while he was trying to land an aircraft he got temporarily blinded.

At the Sarasota-Bradenton International Airport in Florida the pilot was coming in to land on the evening of January 22 when the incident took place.

Fortunately the plane landed safely and after the event the vision was still blurry.

After hearing reports the police attended the scene that a laser was pointed at aircraft making the approach to the airport.

Before throwing rocks a police helicopter was deployed and footage recorded from the cockpit showed the perpetrator shining a laser at them too.

The suspect was located by the Manatee County Sheriff’s deputies, Charlie James Chapman , 41, on the east side of the airport located behind a forklift truck.

A hammer at police was brandished by him when he was surrounded and the officers eventually tasered him , a laser pointer was found in the suspect’s pocket.

Before being moved to Manatee County jail Chapman was taken to a medical centre and it was later discovered that he showed the laser at an aircraft on four occasions.

Manatee County Sheriff’s Office said that pointing a laser at multiple aircraft did not end well for Charlie Chapman Jr. Last night he was arrested after pointing one at a plane heading into SRQ Airport and then at our MCSO Aviation Unit helicopter. He was even accused of throwing rocks at the helicopter.

In the UK during the year 2017, tough new laws on lasers were rolled out and according to the law the people who shine lasers at pilots or drivers of trains and buses can be jailed for up to five years.

In order to stamp out the practice the courts can impose unlimited fines.