Mandarin Hotel Group to re-brand an existing hotel in Switzerland 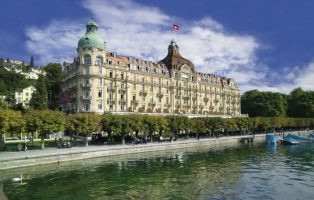 The Mandarin Hotel Group has said that it will manage and re-brand an existing hotel on Lake Lucerne in Switzerland. The hotel is under renovation and will be re-opened as Mandarin Oriental Palace, Luzern in the 2020 end.

The iconic hotel first opened its door in 1906. The renovation work of the project includes restyling of suites and guestrooms, re-designing of public areas, restaurants and bars and landscaping of outdoor grounds.

After the renovation work, the hotel will have 146 rooms and suites offering views of the lake and the mountain. A restaurant a bar will also be there apart from a variety of social and meeting facilities, spa and a fitness room.

Lake Lucerne happens to be a tourist hotspot. The city is home to Switzerland’s popular landmarks including Chapel Bridge among others.

The Group Chief Executive of the hotel, James Riley, said that the group was looking forward to opening a new hotel in Switzerland, which would complement the group’s growing portfolio in Europe.

The Mandarin Oriental, Bangkok, will also be re-opening its river wing. After the re-opening, the hotel will boast an increased number of suites along with enlarged guestrooms with a beautiful view of the Chao Phraya River.

The riverside restaurants of the hotel are being renewed besides the hotel’s lobby. The hotel will also have a new Japanese Kaiseki-style restaurant by Michelin- celebrated chef Takagi Kazuo of Kyoto Cuisine Takagi in Japan. The property’s two swimming pools have also been re-landscaped and new relaxation areas and cabanas have been added.