March of the Titanosaurs on tourism route in Winton, Australia 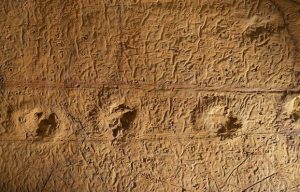 Ancient dinosaur tracks could add to the tourism industry in Winton, Queensland, Australia. The tracks are that of giant sauropod, left some 95 million years ago. Sauropods are the type of dinosaur which includes the diplodocus and brontosaurus.

Each of the animal’s hind footprints is nearly one meter across and they are in remarkable condition as per the experts. As per the Queensland’s Tourism Industry Development Minister Kate Jones, the sauropod footprints are exceptionally well-preserved.  The impression of a giant thumb claw is clearly visible on most of the forefeet and, in some, the impressions of individual toes can be identified. He believes that these tracks will create international exposure for Winton which will have a significant impact on the outback tourism economy.

As per the Australian palaeontologist Dr Stephen Poropat from Swinburne University of Technology in Melbourne, having three major dinosaur groups – sauropods, ornithopods and theropods represented on the same trackway surface was incredibly rare.

The trackway is currently in the process of being removed and relocated to the nearby Australian Age of Dinosaurs Museum due to expected monsoon. An exhibition featuring the tracks, named ‘March of the Titanosaurs,’ is expected to be up and running by May 2020.