Masters of Modern Indian Cuisine from India Team up at Sidart 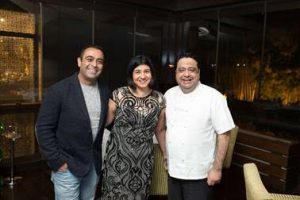 Fans of Sidart are in for a very special treat this July thanks to a chef collaboration which will see India’s most acclaimed and awarded top Chef Manish Mehrotra of Indian Accent Restaurants visiting Auckland to join forces with award-winning chef and restaurateur Sid Sahrawat.

With more than 20 years of culinary experience, Chef Manish is widely regarded as the most exciting modern Indian chef in the world today. He is set to join Sahrawat in the kitchen for two nights only, on July 17-18.

This once in a lifetime chef collaboration is part of the Elemental AKL presented by Auckland Tourism and Economic Development and is also a feature of Ponsonby’s Eat Drink Love Ponsonby. Elemental AKL is a new region-wide festival illuminating Tāmaki Makaurau during winter from 1-31 July 2019.

Hailed as one of the top chefs in India – and globally – Manish Mehrotra and Indian Accent have helped put modern Indian food on the gastronomic map, showcasing inventive Indian cuisine by complementing the flavours and traditions of India with global ingredients and techniques.

Opened in 2009 in New Delhi to significant acclaim for its ground-breaking approach to contemporary Indian food, Indian Accent New Delhi has won several awards and global recognition, including being Sid and Chand Sahrawat with Indian Chef, Manish Mehrotra at the Indian Accent in Delhithe only restaurant from India on the World’s 100 Best list since 2015. It has been awarded the Best Restaurant in India by Asia’s 50 Best Restaurants (Asia’s 50 Best Restaurants 2019), every year since 2015 and is one of Time Magazine’s, 100 Great Destinations in the World.

Indian Accent subsequently opened in New York in 2016 and in London in 2017 to critical and popular acclaim.

Sid Sahrawat and wife Chand met Manish and dined at Indian Accent in New Delhi when they were in India last December. It was after this meeting that the couple decided to invite Manish to Auckland and offer Sidart diners a first-hand opportunity to sample his culinary creations.

Sahrawat says it is an honour to have Manish and his team agree to come to Auckland to collaborate with the Sidart crew.

“Our dinner at Indian Accent in December was by far the standout experience for us during our two-week trip in India and I’m really looking forward to working in the kitchen with a chef who I have huge admiration for. It’s going to be a dining experience like no other.”

“Chand and I are so proud of Auckland and we can’t wait to show Manish around our stunning city and introduce him to the many incredible food offerings we have here in Tāmaki Makaurau that makes us such a diverse culinary destination.”

Chef Manish describes his cooking style as “inventive Indian cuisine” and says he can’t wait to create Indian food with an international accent in Auckland.

Chef Manish Mehrotra of Indian Accent says, “We are excited to present Indian Accent food for the first time in New Zealand and are looking forward to working with Sid and Chand during the pop-up at Sidart. I hope diners will enjoy the food and the experience.”

Manish adds, “I am also looking forward to trying local cuisine, exploring the ingredients and learning something from it all.”

The chef collaboration takes place over two nights, on July 17-18. It comprises of six canapés and a six-course tasting menu for $250 per person, with a glass of Louis Roederer or a non-alcoholic Seedlip cocktail on arrival. Wine matching is available for an additional $100 per person.

Sid and Manish will each be responsible for three canapés and three main dishes. Some dietary requirements will be catered for – diners need to contact the restaurant to check before booking.