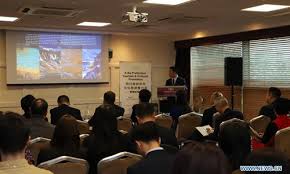 A team from the southwest Sichuan Province of China, the hometown of giant pandas organized a meeting here on Monday to endorse their tourism in Ireland.

Almost 100 people mainly from the tourism industry took part in the promotion event arranged at Crowne Plaza Dublin, a four-star hotel in the Irish capital.

It was a two-hour meeting, officials from Sichuan’s Aba Tibetan and Qiang Autonomous Prefecture narrated the participants about the rich tourism resources in the region.

Situated in the northwest part of Sichuan Province, the prefecture is of a similar size to Ireland but with less population due to its high altitude. The region is popular for its snowy mountains, lakes, rivers, waterfalls and grasslands.

However what makes Aba prefecture popular is the Wolong National Nature Reserve, the main habitat of the giant pandas in China.

The Four Girls Mountains, highest in the region with its peak measured at 6,250 meters above sea level, are a special attraction for mountaineers from home and abroad.
Also, Aba prefecture is striking for its customs and traditions out of multiple ethnic groups. The ethnic Tibetans account for 55 percent of the prefecture’s total population, followed by Han people (about 25 percent) and Qiang people (about 18 percent).