Megastar Akon plans to invest in his native Senegal tourism 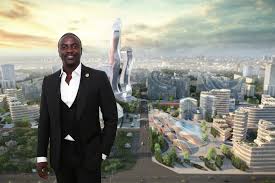 Industry and government officials said Thursday that Akon, the Senegalese-American singer and songwriter, has pledged to invest in tourism in his native Senegal.

Best known for his R&B hits such as “Locked Up” and “Smack That,” the singer signed a deal with Senegal’s state-owned tourism company SAPCO on Tuesday.

“Beyond his status as an artist, it is Akon, the investor who believes in Africa (signing up to the agreement),” the tourism ministry said in a statement before the ceremony.

SAPCO Secretary General Aliune Ndiaye said the deal was a memorandum of understanding (MoU), so the size of the future investment is still unclear.

He added that Akon plans to build a complex in the seaside village of Mbodiene, some 120 kilometers south of capital Dakar.

The rapper, whose real name is Alioune Badara Thiam, spent his early childhood in Senegal but moved to the US at age seven, where he later rose to superstardom.

A spokesperson for Senegal’s tourism ministry said the singer wanted to build a sustainable tourism village that would “campaign for the environment”.