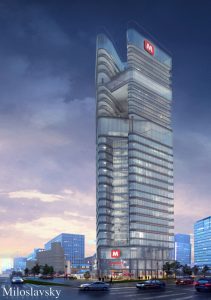 Meininger hotel group announced the  singing  of  paperwork for its first property in Israel.  The group’s first hotel in the Middle east will be built on Levanda Street in Tel Aviv.

The step represents part of its growth plans to operate over 35,000 beds worldwide by 2024 while the hotel will be located in a 28-storey mixed-use building at 53, Levanda Street Tel Aviv.

The hotel is scheduled to open  in the second half of 2024 in 2018 about four million tourists visited Israel which is a record-breaking number resulting from a solid marketing strategy.

It has strengthened its  infrastructures and collaborated with foreign travel agencies and low-cost airlines.

An 11 percent increase in visitor number has been noted in Tel Aviv last year and it continues to increase in demand for accommodation over many years mainly in the budget segment.

Hannes Spanring, chief executive of Meininger said that the expansion into Israel opens up great potential for Meininger Hotels in a completely new market.

They are the first internationally operating hospitality company to bring the hybrid hotel concept to the Middle East.

Over the last ten years the city’s supply has grown and accommodation in the hotel, economy and budget segments is severely under-represented.

There will be 210 rooms and 800 beds across the floors four to 15 along with an exclusive lobby on the ground floor.