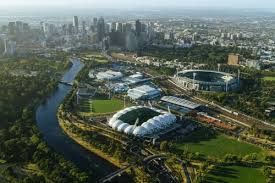 The world’s biggest contest sport will rock Melbourne this October with UFC 243: Whittaker vs Adesanya set to pack Marvel Stadium, home of the largest crowd in UFC history. Acting Minister for Tourism, Sport and Major Events Jaclyn Symes welcomed the return of UFC to Marvel Stadium for the first time since the UFC 193 blockbuster bout between Ronda Rousey and Holly Holm in 2015, which drew a capacity crowd of 56,214.

The Andrews Labor Government is helping to bring the best events to Melbourne and regional Victoria, driving the state’s burgeoning visitor economy and supporting thousands of jobs. The Labor Government in 2015 lifted a ban on mixed martial arts fighting in octagonal enclosures, paving the way for the unprecedented crowd that poured through Marvel Stadium gates for UFC 193: Rousey vs Holm.

The demand for the sport remains strong, with UFC 234: Adesanya vs Silva staged at Rod Laver Arena earlier this year selling out in just eight minutes.

The UFC 243 card on Sunday, 6 October will feature Australian fighter Robert Whittaker taking on New Zealander Israel Adesanya to unify the UFC world middleweight title. The promoters aim to make UFC 243: Whittaker vs Adesanya the largest combat sports event to have taken place on Australian soil, with fans to flock to Melbourne from around Australia and overseas and millions more expected to watch the fight across the globe.

The event will provide significant worldwide exposure for Victoria, with UFC boasting more than 300 million fans and a live TV broadcast confirmed for 170 countries. The major events generate $1.8 billion in economic benefit annually for Victoria and provide around 4,700 full-time equivalent jobs in the broader event industry.

UFC 193: Rousey vs Holm alone generated more than $100 million for the state’s economy, with 40 per cent of tickets sold to fans from outside Victoria.

The acting Minister for Tourism, Sport and Major Events Jaclyn Symes their major events calendar is the best and most diverse in the country and Melbourne may well break another attendance record at Marvel Stadium come October. Massive drawcards like UFC 243: Whittaker vs Adesanya attract people from around Australia and the world, supporting thousands of jobs for the state.

UFC president Dana White said that they have two champions in Whittaker and Adesanya fighting for the title on home turf is huge – this will be the biggest fight in Australian history.