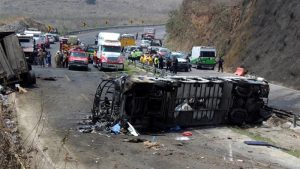 At least 14 people dead and about 50 more were injured, when a bus crashed in the northern Mexican state of Chihuahua.

The chief of firefighters and civil defense for the town of Saucillo told that the accident was reported before dawn. He said the vehicle was travelling from the border city of Ciudad Juarez to Torreon and that authorities did not yet know what caused the crash.

The administrative official said 10 passengers died at the scene and some 28 were hurt.