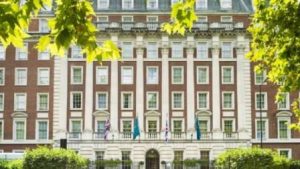 Millennium Hotel London Mayfair is soon to reopen with a new name and a new manager, following a S$86.2 million renovation.

The Biltmore, Mayfair as it will be known, will have 257 guest rooms and 51 suites, a spokesman for the hotel said on Tuesday.

The facelift will “reflect the property’s origin as a sophisticated and elegant London private residence”, he added.

The Biltmore, Mayfair, which is near Hyde Park, will open in the first half of this year as part of Hilton’s luxury collection brand LXR, following a management franchise agreement between Hilton and owner Millennium and Copthorne Hotels (M&C).

Hilton will manage the hotel under a 10-year agreement with M&C, a London-listed unit of Singapore property giant City Developments, having the option of managing it under Hilton’s LXR brand after five years. The refurbishment started in November 2017 and resulted in the hotel closing at the start of last July. Besides the plentiful lodgings, the hotel will have restaurants, an alfresco terrace, a cocktail bar, a gym and a 500 sq m ballroom.

M&C chairman Kwek Leng Beng said The Biltmore, Mayfair is part of the group’s repositioning of the former Millennium Hotel London Mayfair as a new five-star deluxe hotel. M&C said it is “familiar with Hilton”, having partnered it on several hotel management contracts, including in Seoul, Bangkok and New York. Mr Patrick Fitzgibbon, a senior vice-president at Hilton, said that the (hotel’s) unique craftsmanship and historic surroundings… will make for a truly memorable stay.

LXR seeks to ensure personalised attention and luxurious yet locally immersive experiences for guests. Last year, the collection welcomed its maiden hotel in Dubai, the 234-room Habtoor Palace. The Biltmore, Mayfair will be the first LXR hotel in Europe.