A minaret at the entry gate of the Taj Mahal collapsed on Wednesday night as the wind with velocity of over 130 km per hour swept Agra. 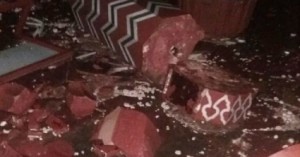 The 12-feet metal pillar at the entry gate, referred to as Darwaza-e-Rauza, crashed just past midnight. According to reports, a minaret south gate fell off, while a small white dome was hit too.

The sources said that the main monument of Taj Mahal was also affected during that 40-minute long rainfall in the region. But there was no casualty reported.

Earlier this month, green and black patches emerged on the Taj Mahal due to insect attack. The patches caused by a particular species of insect, Goeldichironomous, has become a regular affair on the iconic mausoleum. The monument faces severe attack from these bugs around four-five months of a year.

An earlier study by the ASI to look into the reasons behind this had revealed that Yamuna pollution is responsible for green patches on the iconic monument.