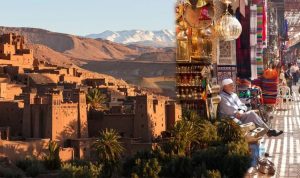 Morocco Tourism figures rose by 4.1 percent with a total amount of 2.506 million tourists. This latest tourism figure is published by Moroccan Tourism Observatory during the period between January and March 2019. The tourist arrivals in Agadir and Marrakech rose by 4% and 8%, respectively, according to Morocco’s Tourism Observatory.

The number of Moroccan expatriates that visited Morocco also increased by more than 5%, whereas the number of foreign tourists rose by 4%.

According to the same source, the number of overnight stays in some of the popular and recognized hotels witnessed an increase of 4%, with Agadir and Marrakech being the two main tourist destinations that “generated 59% of hotel nights.”

Moroccan Tourism Observatory also indicated that Tangier demonstrated “a good performance with over 9%” of increase. Meanwhile, the observatory noted, cities like Casablanca, Rabat, and Fez experienced a state of “stagnation,” with Casablanca showing a decrease of 3% in tourist attraction.

The top states that witnessed a notable rise in foreign tourist arrivals are mainly France (+ 10%), Italy and Holland (+ 8%), Germany, Belgium and the United Kingdom (+ 3%), and Spain (+ 1%),” according to Maghreb Arabe Press (MAP).

Morocco is a wondrous, eye-opening taste of the exotic, with snake charmers and conjurers, souks piled high with hordes of treasures, and endless glasses of mint tea. It’s also an adventure into some of North Africa’s most stunning scenery, with the desert on its doorstep and the craggy heights of the Atlas Mountains beyond.

Travelling to Morocco is also a journey into a timeless, tranquil world of cute coastal villages, colorful-painted towns that cling to hillsides, and remote outposts defended by fairy-tale adobe forts.

Morocco is a merging of the African and Arab worlds and is steeped in age-old customs. It’s no wonder Morocco has been feted by artists and writers for decades and continues to enchant all who visit