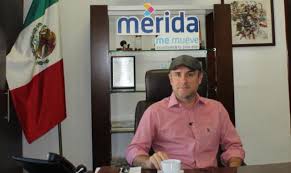 Mayor Renán Barrera Concha explained that in 2018 Mérida was, by far, one of the tourist destinations in Mexico with greater demand among national and international tourists, since only in municipal modules of September 2018 to date, about 69,397 visitors took part, in comparison to only 41,152 during the same previous period of time.

“This represents a 68.64% increase in the number of visitors served by the City of Mérida”, said the mayor.

“These figures indicate that Mérida is on the right track and that motivates us as a City Council to promote more actions and programs that attract more people and families from other parts of Mexico and the world to our city. Mérida’s prestige has been earned due to its safety, the beauty of its Historic Center and the warmth of its people”, he continued.

In that sense, the director of Municipal Economic Development and Tourism, Eduardo Seijo Solís, mentioned that through the tourist information department, 476 guided visits were conducted in the Historic Center, with the participation of 10,540 tourists worldwide.

He added further that as of January 2019, visits to the interactive module have risen by 19.08%, from 8,851 to 10,540 tourists served. “Now a new tour was created in which the splendor of the Paseo de Montejo is shown,” Seijo Solís said.

Mayor Renán Barrera explained that this panorama is also because of the quality of life and the good services that the city provides the citizens and visitors, thus families from different sections of the country and the world adopt Mérida as their home and decide to settle down in our city.

He also mentioned that, in addition, the City Council works on other projects that trigger the tourism arrival, as is the case of the participation of Mérida in the gastronomic show held only recently in Holland, highlighting one of the main ingredients in modern Yucatecan cuisine, the Dutch cheese (coomonly known in Yucatán as queso de bola) “Gallo Azul”.

“What is intended with these projects is to continue promoting Mérida’s prestige in the world so that more people from other regions and other countries get closer to our roots and traditions, and get to know the essence of our identity”, the mayor said.