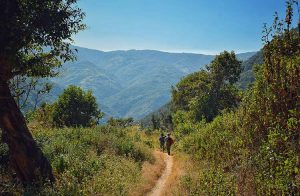 More than 50 foreign travellers have become stranded in the town of Hsipaw in State following rebel attacks on Myanmar military outposts and police security stations in the state’s Naung Cho Township and Mandalay Region’s Pyin Oo Lwin Township on Thursday.

“I heard from some tour operators that trips from Mandalay to Pyin Oo Lwin and Hsipaw have been suspended. I don’t know details yet. Around 50 foreign travellers on sightseeing tours are stranded at hotels in Hsipaw,” he said.

The Union of Myanmar Travel Association and the Ministry of Hotels and Tourism are holding talks to provide necessary assistance to foreign travelers stranded in the area.

nstability in popular tourist destinations will have a negative impact on the tourism industry, said U Myo Yi.

“I have suggested that the guests should stay [in Hsipaw] for one or two more days. I suggested those who have visa issues and personal matters return by plane. I am working with around ten foreign tourists right now,” said U Myo Liwn of Mr. Bike Travel and Tour.

The Ministry of Hotels and Tourism announced on Facebook on Friday that, in partnership with the privately-owned domestic airline Air KBZ, special flights for foreign tourists will operate from Lashio to Mandalay and Yangon on Aug, 17.

Foreign embassies in Myanmar issued alerts following the clashes. Foreign tourist arrivals are likely to decline in the months to come, U Myo Lwin said.

“Our company has suspended trips to Hsipaw. The number of foreign travelers has just increased lately. I am sorry for the tourism industry that this happened,” he said.

The Shan State attacks killed eight Myanmar soldiers and a police officer, according to the TNLA, while the military said the DSTA attack killed a civilian and wounded one soldier.

A total of 15—ten Myanmar soldiers, three police officers and a civilian—were killed in the attacks, according to rescue workers on the ground. The Tatmadaw is now undertaking clearance operations in Naung Cho and Pyin Oo Lwin townships.