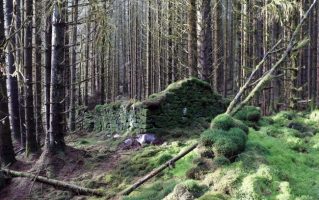 Archaeologists are now suggesting that Scottish ruins hidden in a remote forest in the Scottish highlands were once an illegal whiskey distillery.

Last year, a local group alerted the government agency Forest and Land Scotland about the ruins indicating they were located in the forests above Lord Arch, around 30 kilometres north of the city of Glasgow. A 3D survey of the site was directed by the FLS archaeologist Matt Ritchie. Ritchie has now claimed that the site might have been used for distilling whiskey for sale in Glasgow in the late 1700 or 1800. Distilling whiskey was a lucrative but illegal trade at that time.

The long, narrow buildings found on the site are ideal for whiskey stills, he claims.

As per the locals, the region was used to hide illegal whiskey stills and stolen cattle, but historical research has found nothing conclusive.

Ritchie and his team are using 3D data from laser scans of the buildings to create an artistic interpretation of some of the buildings as they give the impression of being a whiskey distillery at some time in the 1700s.

The team’s perception is that the two large brick kilns found on the site might have been used for drying corn as well as to malt barley for the whiskey-distilling process.

While the front of one kiln has been destroyed, its central bowl-shaped chamber remains; the chamber of the second kiln has collapsed, but the kiln’s front face is still intact.

Ritchie has combined the 3D data of the two kilns and has created an image showing how a complete corn-drying would have looked.

The digital survey of the ruins also highlights their remote location in the forest.

Ritchie said that any whiskey distilling at the site might have been secret, and the large kilns might have been used only to dry grain. He said that the archaeological excavations can divulge positive evidence of their earlier use.