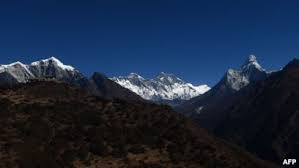 Tourist arrivals in Nepal reached one million for the first time last year, boosted by increased visitors from India, China, the US, Sri Lanka and the UK.

For Nepal, tourism is a major revenue earner and a huge source for its impoverished economy.

Fears for the industry surfaced after a devastating earthquake in 2015 that killed nearly 9,000 people and destroyed many of the country’s heritage sites.

Although the earthquake gave a devastating blow to the economy, the sector has since gradually recovered.

Tourism contributed 7.8 per cent to Nepal’s GDP in 2017, creating over a million jobs, according to the World Travel and Tourism Council.