Netflix ‘Dark Tourist’ lands in trouble due to its second episode filmed in Fukushima, Japan 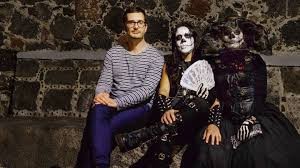 Taking audiences to some of the most offbeat, off-putting and downright disturbing places on the planet has made the Netflix series Dark Tourist a global sensation.

The first season of the pioneering documentary series, which was released in July, charts host David Farrier’s excursions to grim locations, from a forbidden ghost city on Cyprus to the Milwaukee sites where serial killer Jeffrey Dahmer murdered his victims.

But the series has landed in hot water due to its second episode that was filmed in Japan.

There, government officials are thinking of taking action against Netflix over footage from inside Fukushima, which was devastated by an earthquake and tsunami in March 2011.

In the episode, Farrier, a New Zealand journalist, takes a bus tour with other foreign sightseers into areas which were impacted by the disastrous nuclear meltdown at the Fukushima Daiichi plant.

Now, officials from the Fukushima Prefectural Government said that they are investigating the Dark Tourist episode, thinking that it would “fuel unreasonable fears related to the March 2011 disaster at Tokyo’s Electric’s tsunami-stricken Fukushima No. 1 nuclear plant”.

Hundreds of thousands of people fled for their lives when a tsunami swept through Fukushima and set off three nuclear meltdowns at the Daiichi power plant, exposing the region to radioactive material.

Although the Japanese government has deemed some of the affected areas to be safe, still many remain abandoned. Other areas are still designated as off limits.

But Fukushima’s perceived nuclear danger and its eerie setting have made it one of the world’s most popular drawcards for “dark tourists” — travellers who seek out locations with disturbing histories and associations with death and tragedy.

So-called nuclear tourism attracted around 94,000 overseas visitors to Fukushima in 2017.