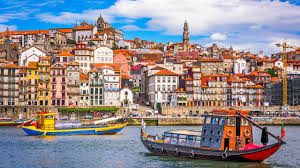 The travel operators in Portugal’s busy city of Lisbon are currently experiencing golden times in travel and tourism sector. The cruise tourism revenues are spiraling amid a boom that’s bringing Europe’s young folks to the Portuguese capital, which is considered one of the hippest places on the continent.

Over the past five years, tourist arrivals have surged a staggering 81%, to 30 million in 2018, in part thanks to a new passenger terminal for cruise ships opened in Lisbon two years ago. About 300 of those giants of the seas are calling at the new port every year, with at least 600,000 passengers expected to embark or disembark there in 2019.

Yet, Lisbon’s mass tourism is turning out to be both a boon and a bane, says Francisco Ferreira from the environment group Zero. “Contrary to other European airports, like the one in Frankfurt, Lisbon’s airport only knows few restrictions for night flights. And the existing flight limitations are widely ignored.”

The activists from Zero have taken measurements of noise levels in urban areas close to the airport and have found them to far exceed legal limits, he complains. nThe planes are coming in just a hundred meters (328 feet) above rooftops. The people living there have not a minute of relief during peak holiday season in the summer.

At the other end of the city, on the banks of the Tejo River, the pollution situation isn’t any better. Especially since the new €50-million ($55.5-million) cruise ship terminal was opened in 2017 Lisbon’s inhabitants have been suffering. Massive amounts of particulate matter and sulfur dioxide (SO2) emissions have made Lisbon’s port the sixth most-polluting in the whole of Europe. SO2 emissions from the cruise ships are 86% higher than those emitted by Portugal’s entire car traffic over a year.

Ferreira says that the cruise tourism boom is especially burdening people living in Lisbon’s historic old town with intolerable levels of noise and emissions. The local administrative authorities are turning a blind eye to the problem. Ferreira assumes that the inaction is prompted by the fact that tourism has become a main money spinner for the crisis hit country, presently garnering more than €15 billion in government revenue.

Although brand new, the infrastructure at the new cruise terminal is not up to par with industry standards. Unlike many other cruise ports, Lisbon’s doesn’t provide portside electricity for the ships. The authorities only request that companies use diesel fuel for power generation rather than heavy oil when their ships are moored there.

And measuring stations to monitor emissions will only be installed once EU authorities request them and, of course, provide subsidies for the investment, the authorities insist.