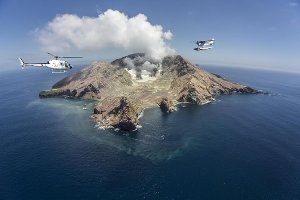 The most active cone volcano of New Zealand, White Island, has erupted on Monday with dozens of tourists present. At least 23 people were injured and several tourists are unaccounted for. A rescue operation is currently underway to save people who were pictured inside the crater at 2.10pm, minutes before the explosion, on the White Island Crater Rim camera.

Prime Minister Jacinda Ardern said the situation on White Island, which is off the eastern coast of the North Island, was “significant and evolving”. She said about 100 people were believed to have been on or around the island at the time of the eruption, but police later said the number was fewer than 50. At least 23 people have already been brought to the mainland on stretchers covered in ash.

Ardern said a number were currently unaccounted for and some had been injured. The police said some people had been brought to the mainland from the White Island and one person was critically injured. A statement from police confirmed several people who were on the island at the time of the eruption had not been located.

A level four alert was issued for the volcano, also known by its Māori name Whakaari, indicating a “moderate volcanic eruption,” according to the science agency GeoNet. The scale runs from zero to five – a major eruption.

Judy Turner, the mayor of Whakatāne – the seaside town closest to White Island – said there were people nearby at the time the volcano erupted, and some had been injured. She did not have further details.

St John Ambulance said that up to 23 people were believed to have been injured. Ambulance officers were traveling to the island with the coast guard and seven helicopters had also been dispatched with paramedics on board.

A spokeswoman said the service’s medical director would establish a triage unit on the island when he arrived.

A police statement said officers were supporting other emergency services and that it was an “evolving situation”.

“A number of people are reportedly injured and are being transported to shore. At this stage it does appear to be a very significant issue, particularly the scale of those affected.”

It is reported that footage taken from the volcano’s crater camera appeared to show people in the area minutes before it erupted. The daily tours allow 10,000 people a year to visit the volcano. The company that runs the tours could be contacted.

The civil defence authority warned that the situation was hazardous “in the immediate vicinity of the volcano”, which is 48km off the coast of Bay of Plenty, a sunny, beachfront region popular with tourists. The police have blocked streets close to the water, and the Met Service weather agency had warned the local aviation community to avoid the area by plane.

White Island last experienced a short-lived eruption in 2016, in which no one was hurt. The geological hazard trackers GeoNet had registered moderate volcanic unrest on the island for weeks, before Monday afternoon’s eruption.

RNZ said that GNS volcanologist Michael Rosenburg said at the time that over the past few weeks there had been an increase of sulphur gas from deep inside the volcano and an increase in tremors.