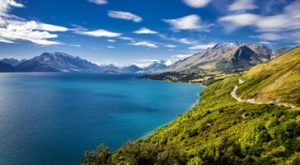 New Zealand is expecting strong tourism season this summer as the government is helping to develop its tourism industry.

This year the regions have received a helping hand from the government, which unveiled its $8.5 million Responsible Camping Fund earlier this year. More than 25 council projects around the country received funding to cover facilities, services and educational support in a bid to prepare them for the peak season.

Mr Gilbert said that New Zealand is a popular destination and they got a great reputation around the world as a fantastic place to visit and I think all indicators are looking good, so yeah it should be a really fantastic summer. The forward bookings were looking strong for its tours in both Auckland and Christchurch, he said.

The business was seasonal with summer recording the higher number of visitors and that meant hiring additional staff.

Destination Marlborough general manager Jacqui Lloyd said the region was looking forward to a bumper summer now that State Highway 1 had been back in action for more than a year. The closure of the highway hit Marlborough hard as it cut off the easy access between Christchurch and the region.

Already the destination was experiencing an increase in visits from people travelling up from Christchurch and more North Island visitors were also venturing over via the ferry, she said. The Marlborough District Council received $195,000 from the Responsible Camping Fund to go towards upgrading popular car parks and installing temporary toilets and additional signage. The boost would make a difference this summer, particularly the new signs, Ms Lloyd said.  The funding also meant more infrastructure would be in place to support the surge, she said.

However, not all of the sector is feeling as hopeful about the peak summer season. In Christchurch, All Star Inn manager Phil Leslie said the youth market had slowed down. The tourism Industry Aotearoa chief executive Chris Roberts said after a relatively quiet winter he expected a record summer with domestic tourism at its peak. That put a lot of pressure on operators to find more staff, Mr Roberts said.

About one in eight New Zealand workers are employed either directly or indirectly in the tourism industry. There were likely to be thousands of vacancies, Mr Roberts said.

The use of the fund includes building new shower blocks, rubbish bins and more monitoring. That was where the fund stepped in to help pay for infrastructure and services that regions need to cater for current and projected tourist numbers, he said. Of the 27 projects announced, 23 would be finished by the new year, Mr Davis said.