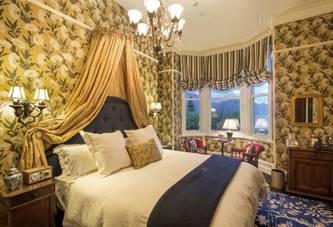 A fan of great design and art? Then consider bunking down in one of these fabulous hotels, where design shines.

Art and design is trending in New Zealand’s hotel industry with the opening of a breath-taking new lodge in the Southern Alps, a new Auckland city hotel signed by Kiwi fashion designer WORLD, and a design hotel that gave artists free rein to design directly on the walls of 25 suites.

Try spotting The Lindis – New Zealand’s newest luxury lodge (opened 1 November 2018) – from the air and you’ll likely miss it, look up and you’re surrounded by a myriad of stars. The Lindis is an architectural tour-de-force featuring a roofline that follows the natural undulations of its South Island high country resting place, nestled in a conservation park in a dark sky sanctuary. Interiors are pared back with natural materials, wood and stone, bringing the magnificent Ahuriri Valley landscape indoors. With the night sky and astro-tourism in mind, the next stage of The Lindis will include individual glass pods as an extension of the main lodge.

The Ahuriri Valley is in the central South Island, near Omarama (a tiny town on the edge of the Southern Alps), just south of Aoraki Mt Cook and north of Lake Wanaka. There’s plenty to do outdoors in this stunning outdoors environment from hiking and fishing to e-bikes, MTB and horse riding to gliding (Omarama hasn’t some of world’s best gliding conditions) or stargazing by night.

So/ Auckland is a distinctive new experience in New Zealand’s biggest city. A first for Australasia and South Pacific, and only the seventh in the world, So/ teamed up with Kiwi fashion innovator WORLD to create a sophisticated five-star, 130-room inner-city hotel. WORLD’s Benny Castles spent three years bringing his signature bold character to the design, inspired by the city’s volcanic origins and the heritage building’s former life housing gold reserves, and described as “a hypnotic experience where the outside world is left behind.” Dutch design house Moooi founder Marcel Wanders, famous for creating multi-layered sensory experiences, is responsible for the ground floor fit out. And, as if that’s not enough, guests can be seen around town in the gold Bentley SUV.

So/ Auckland is centrally located in New Zealand’s biggest city on the fringes of the bustling Britomart / Fort Street hospitality precinct where some of the city’s best flavours are to be found. After dining in So/’s 15th floor restaurant (helmed by an acclaimed French chef, former owner of a Michelin-starred restaurant in France), whip around the corner for one of Giapo’s amazing ice-cream creations.

Gallery 4 (25 suites on level 4 – launched on 1 November 2018) is the latest edition of the evolving design story at the QT Wellington. Once owned by art collector and entrepreneur Chris Parkin, the QT Wellington Hotel (formerly Museum Art Hotel) features on Yahoo’s list of the “Best Hotels in the World with Magnificent Artwork”. Located across the road from the Museum of New Zealand Te Papa Tongarewa and the waterfront walkways, the hotel is scattered with original artworks from local and international artists, including a life-size bull made from corned beef cans by New Zealand artist Michel Tuffery as well as huge canvases and glass display cabinets with small oddities. Now there’s a whole new collection in Gallery 4 (the work of 19 New Zealand artists) matched with bold interiors styled by architect and designer Shelley Indyk.

Wellington is New Zealand’s capital, and sits at the base of the North Island. Explore the Museum of New Zealand Te Papa Tongarewa’s permanent and current exhibitions. Wellington is also considered the craft beer capital of the country: a wee ale is highly recommended.

The Lodge at Kinloch, Taupo

Located on a Jack Nicklaus-designed 254-hectare golf course on the shores of Lake Taupo, the Lodge at Kinloch is a remarkable white modernist building complete with turrets that is intended as a modern interpretation of a Victorian-era castle. The building was designed by internationally award-winning New Zealand architect Andrew Patterson, while the lodge interiors were conceived by renowned interior designer Virginia Fisher. Inside, there’s a baronial feel: think velvet, fox fur and brass contrasted against whitewashed walls and high ceilings.

Lake Taupo lies about three-and-a-half hours’ drive south of Auckland, in the centre of the North Island. The fitness-minded might like to tackle the Tongariro Alpine Crossing, a popular day hike, or just amble along Lake Taupo’s 71 kilometres of walking trails. The lake is famed for its trout, so a little fly fishing is highly recommended.

Queenstown might have a reputation as New Zealand’s adrenalin capital, but the historic Hulbert House offers respite from the action. An elegant 130-year-old Victorian villa just 500 metres from the centre of Queenstown, the boutique accommodation has six opulent suites featuring canopy beds, chandeliers and antique writing desks. With a colourful history that includes being used as a refuge for girls, a maternity home and a backpackers’ hostel, the homestead was restored by leading interior designer Neil McLachlan and is protected by the Historic Places Trust.

Queenstown isn’t called the Adventure Capital of NZ for nothing. Skiing, jet-boating and bungy jumping will get the adrenalin pumping. If you want to go a little easier, cruise the peaceful waters of Lake Wakatipu, follow the Queenstown Wine Trail or take a scenic flight to see the landscape from a new perspective.

Napier is known as the art deco capital of the world, and the Masonic Hotel might just be the jewel in the city’s crown. Built in 1932 after an earthquake and subsequent fires razed the east coast city, the waterfront Masonic Hotel is built of reinforced concrete and emblazoned with the word MASONIC in red leadlight above the entrance. With a rich history that includes hosting Queen Elizabeth II, Anna Pavlova and Mark Twain, the Masonic was refurbished and reopened as a boutique hotel in 2010.

Napier sits on the North Island’s coast in the Hawke’s Bay region, four hours’ drive from Wellington. Of course, there are myriad art deco gems to explore in town, but the region abounds with … well, everything. Visit a winery, tour an orchard, visit Cape Kidnappers to see the world’s largest colony of gannets or paddle a kayak down the Mohaka River.

A working farm set on the edge of the Pacific Ocean near Christchurch, Annandale offers guests a choice of four distinct places to lay their head. Owner Mark Palmer engaged Auckland architect Andrew Patterson, known for his cutting-edge contemporary designs, to restore the property’s original buildings – an 1884 homestead and an original shepherd’s cottage – and create two additional new luxury retreats. Seascape is an ultra-modern concrete and glass couples’ hideaway cut into a hillside overlooking Whitehead Bay, while the award-winning four-bedroom Scrubby Bay House was designed as “a piece of slowly ageing farm driftwood around which stock can graze”.

The Banks Peninsula, a one-hour drive south of Christchurch, is deeply beautiful, dotted with farms, mountains, bays and beaches (Okains and Le Bons bays are highlights). Its waters are home to colonies of the rare Hector’s dolphin and little penguins, and the township of Akaroa is a slice of France transported to the other side of the world.

Built in 1928, the 10-storey heritage-listed building on Queen Street in Auckland’s CBD that now houses the Hotel Grand Windsor was the city’s first skyscraper. Originally housing teams of bakers and confectioners who made Auckland’s most famous ice-creams, the upper floors of the classically designed building were later converted into offices. Inspired by the art deco style popular at the time of its construction, the Hotel Grand Windsor MGallery by Sofitel opened in 2016 with glamorous public spaces and 79 elegantly designed rooms and suites. The Hotel Grand Windsor has been named the Best New Hotel (in the world) and won the titles of Australasia’s Most Inspired Hotel Design, and Best New Hotel in Australasia at the 2018 Boutique Hotel Awards in London.

There’s an awful lot to explore in New Zealand’s biggest city, but equally beguiling are the islands of the Hauraki Gulf, each offering a wildly different experience. Lap up the wineries and eateries on Waiheke, climb the Summit Track on volcanic Rangitoto or rediscover nature on Great Barrier Island.

New Plymouth, on North Island’s west coast, has become known as an arts and cultural hub so it’s fitting that it should have a luxury hotel with cutting-edge design. Located in the West End precinct opposite the Govett- Brewster Art Gallery/Len Lye Centre, the King & Queen hotel’s exterior features a distinctive vertical louvre screen. Inside, the rooms, suites and apartments showcase art from both local and international artists.

A four-and-a-half-hour drive north-west of Wellington, New Plymouth is dominated by volcanic Mt Taranaki: the summit walk is a challenging eight to ten hours for the experienced climber. More sedentary activities include the town’s lovely parks (which shine in rhododendron season) and its galleries/museums, including the Puke Ariki and the afore-mentioned Govett-Brewster Art Gallery, New Zealand’s only museum of contemporary art.

Once was a time when large banks dispatched managers to every small town in New Zealand and provided them with housing. And that is how the Bank Manager’s Apartment, a two-room flat above the BNZ bank in Winton in Southland, began life in 1933. It has been passionately refurbished by owner Jeannie Peebles, who has remained faithful to the building’s art deco roots and decorated the apartment with New Zealand art. It has a separate library where you can peruse a coffee table book with a glass of wine in hand, illuminated by art deco lighting.

Winton is in the Southland region of the South Island, a hop, skip and a jump to the Oreti River, a fly-fishing hot-spot. It’s only 30km to Invercargill, the country’s southernmost city, and home to lovely heritage buildings. Oyster aficionados might like to head 50 minutes south to Bluff, home to what some say (New Zealanders mostly) are the world’s best oysters.