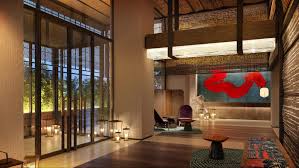 Nobu Hotel Barcelona will be a home to 259 sleek rooms and stylish suites, a 150sq.meters. Nobu Suite has  an elegant spa and gym as well as tailor made meeting and event spaces, the hotel will also house the city’s first Nobu Restaurant along with the Japanese inspired tapas bar; Kozara. Capturing the unique essence of this famous European city, Nobu Hotel Barcelona will reflect the core values that have become synonymous with Nobu Hotels; passionate service, distinctive design and unpretentious luxury.

The interiors, conceptualized by award-winning architecture and design firm, Rockwell Group, seamlessly blend Japanese minimalism with the colourful character of Barcelona to create an integrated mix of luxurious hotel and energised living spaces.

Recognizably Catalan-inspired designs, such as the works of Gaudi, are mingled with the traditional Japanese craft of Kintsugi; the art of repairing broken pottery with either gold, silver or platinum, to create collages of materials, textures and spaces throughout the hotel.

Nobu Hotel Barcelona is located on the top floor of the 23-storey property, guests can dine at Nobu’s world-famous namesake while taking in unrivalled views of the Barcelona city line and the Mediterranean.

The menu will reflect Nobu’s philosophy of locality; paying homage to local ingredients and classic Catalan cuisine, while staying true to the brand’s Japanese DNA. In the lobby, Kozara will serve Japanese style tapas and cocktails using the widest and most unique range of sakes and Japanese whiskeys in town.

Located in the charmingly Catalan neighbourhood of Eixample, the hotel is just a five minute stroll from Plaza de España, a mere 15 minutes from Barcelona’s buzzy La Rambla or a short walk to the main railway station for high speed links to Madrid, Paris, Lyon and Marseille making it ideal for laid-back luxury explorers and business travellers alike.