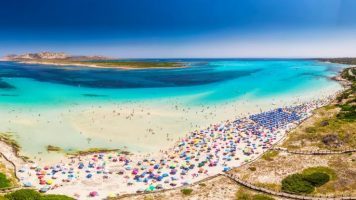 Visitors will be charged an entry fee at La Pelosa Beach very soon.

Mayor Antonia Dian who made an announcement regarding this also said that the number of visitors will also be restricted to the beach.

Authorities have announced a cap on visitor’s numbers and a ticketing system in a bid to preserve the beach.

The council of Stintino has decided to limit the number of tourists during the summer season to 1,500 adults per day. Children will not be counted. Mayor said that there can be maximum 6,000 people on the beach during summer days.

The move is being taken as the beach is overburdened with tourists. The council of Stintino conducted studies to determine how many visitors the beach can take without being damaged.

How the tickets will be assigned is yet to be decided. The authorities concerned are looking for the possibility of an app.

Antonio said that the entry fee may be around 4 Euros per day.

La Perosa Beach happens to be the most popular beach in Sardinia. It is known for its perfect white sand, turquoise waters, and photographable surroundings. An ancient stone tower offshore has made La Perosa a popular beach in the world.