Number of foreign visitors to Japan in January increased 7.5% 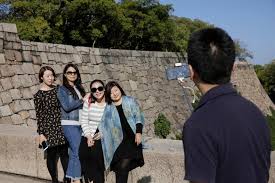 The estimated number of foreign visitors to Japan in January increased 7.5 percent from 2018 to 2,689,400, setting an all-time high for the month, supported by relaxation of visa rules for Chinese tourists.

Hiroshi Tabata, commissioner of the agency, said that the impact of a series of natural disasters last year, including a deadly earthquake hitting the northernmost main island of Hokkaido in September, is normalizing.

Tabata said that the pace of growth has not returned to normal levels in the first half of 2018, partly because visitors from South Korea and Hong Kong are not recovering.

Visitors from a number of other countries increased in the reporting month.

Regarding the trend of visitors traveling around the time of the Lunar New Year holiday season celebrated by some Asian countries in February, Tabata said, “It is relatively good and I think the figure rose about 20 percent from last year.”