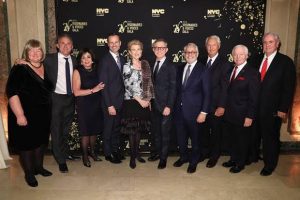 James Monroe Iglehart—2014 Tony Award® winner for Actor (Featured Role–Musical) as “Genie” in Disney Theatrical Productions’ Aladdin on Broadway and currently starring in Hamilton An American Musical on Broadway—served as the evening’s emcee. Ashley Brown—the lead character in Mary Poppins at the time of its Broadway debut in 2006—joined Iglehart on stage. More than 300 guests then enjoyed a medley of musical numbers performed by the pair, spotlighting both productions. The inclusion of Mary Poppins came in advance of Mary Poppins Returns, debuting in theaters nationwide December 19.

“The Visionaries & Voices Gala supports the NYC & Company Foundation in its mission to develop and sustain New York City’s diverse arts community,” said Emily Rafferty, President Emerita of The Metropolitan Museum of Art and Chairman of NYC & Company. “Without question, NYC is the arts and culture capital of the world; ultimately, the arts draw nearly half of NYC’s 65 million annual visitors.”

The NYC & Company Foundation supports the positive impact of tourism on NYC. In 2018, the charitable organization provided grant funding for more than 50 cultural events and programs across the five boroughs—including 20 new recipients for 2018—and supported the development of talent pipelines connecting NYC residents to diverse career paths in the tourism and hospitality industry.