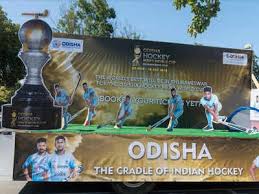 In May earlier this year, when Odisha was hit by cyclone Fani, there was scepticism whether Bhubaneshwar’s Kalinga stadium would be ready in time to host the FIH Series Finals just under a month away. It was not only ready in time but hosted a very good event despite all the constraints.

Over time Odisha has been playing host to multiple sporting events, the Hockey World Cup, Asian Athletics championship and football tournaments. Over the last few years the state government has been steadfastly building an image as a popular sporting destination with the aim to promote tourism and also boost grassroots sports development.

It helps that Sports Secretary Vishal Kumar Dev is also the Tourism secretary and he insists that the strategy to promote Bhubaneshwar as the sports city has paid rich dividends.

“Men’s World Cup Hockey was a platform that helped showcase the new Odisha. As per tentative figures collated by Odisha’s tourism department, the state received 1.61 million and 2.22 million domestic tourists in November and December 2018 respectively, 60% higher than normal. Foreign tourists also arrived in higher numbers in the two months with an average monthly arrival of 15,000, higher by around 50%,” he said, adding the state has pioneered the concept of ‘Sports Tourism’ in the country.

“While people were here, not only did they witness the thrilling matches but also visited various tourist places like, Puri, Konark, Chilika, Chandaka Wildlife Sanctuary, Similipal Wildlife Sanctuary. The same pattern was observed during the Commonwealth Table Tennis Championships and FIH Men’s Series Finals, held earlier this year,” he added.

But even as the state, which recently bagged CII’s Best State for promoting sports award, gets ready for the two hockey Olympic qualifiers earlier next month between India vs Russia (men) and India vs USA (women) and play host to Indian Super League team Odisha FC, the focus has turned towards developing grassroots infrastructure and identifying and nurturing sporting talent in the state.

The state’s sports budget has gone up from Rs 100 crore in 2016-17 to more than Rs 250 crore in 2018-19 and the government has also signed Memorandum of Understandings with seven leading industrialists to set up state of art high-performance centres.

The government is now working on building mini stadiums across the state to provide better infrastructure at the grassroots level while gearing up for the women’s u-17 Football World Cup in 2020.