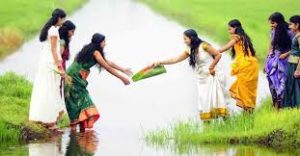 The official Onam celebrations for this year will show the resurgence made by the culture and tourism sectors of Kerala after the harsh 2018 floods, Tourism Minister Kadakampally Surendran has recently explained.

On September 10th, curtains will go up for this year’s official Onam Week celebrations in the capital city.

The festival, arranged by the Tourism Department, will have colourful programs over seven days in several venues.

The prime venue, as usual, will be the Kanakakkunnu Palace grounds.

In the meantime, the State government was also unraveling the possibility of arranging Tourism Conclave to overlap with the Onam celebrations, the Minister said here on Wednesday.

The conclave was targeted at promoting the tourism sector of Kerala.

An organizing committee for the conduct of the celebrations was set up on Wednesday.
Chief Minister Pinarayi Vijayan is the chief patron and the Tourism Minister the chairman of the panel.

C. Divakaran, MLA, is the working chairman and Tourism Secretary Rani George and Tourism Director P. Balakiran respectively are the chief coordinator and coordinator. MLAs from the district head the various sub-committees.

The seven-day celebrations will finish off with a vibrant pageantry on September 16.