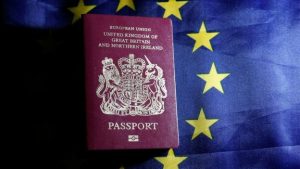 A huge 40% hike in passport applications is expected next year under the Ireland government’s contingency plans for a no-deal Brexit.

The officials are predicting a flood of 300,000 extra applications from Britain and Northern Ireland in 2019 if the UK crashes out of Europe without a withdrawal agreement. It comes as the government ramps up preparations for a no-deal Brexit and is to publish more details of its contingency planning later this week.

There has already been a rush in demand for Irish passports from UK-based applicants since the 2016 Brexit vote.

Last year, officials saw more than 150,000 passports granted to Irish citizens in Northern Ireland and Britain out of the overall total of 779,000 documents issued in 2017. The worst-case Brexit scenario could see that figure double next year alone if all the expected applications were granted.

The Passport Office has been struggling to meet demand, with the government approving the hiring of 220 temporary staff to process a backlog that built up earlier this year.

Meanwhile, the government denied it has ordered the stockpiling of medicines in the wake of a report over the weekend suggesting it had done so.A spokesman for Tánaiste Simon Coveney insisted the Government has not triggered any such measure. He said that under current regulations Ireland continually has a two to three-month rolling stock of medicines “as a back-up as par for the course”.