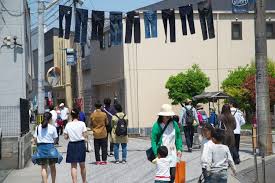 “Kojima Jeans Street” is a section about 400 meters long of the Ajino Shotengai shopping street. The shops use different methods in producing their jeans: for example, indigo dyeing methods with natural colourants to produce bright blue colours. Some jeans are processed to look worn, and some manufacturers hand-weave fabrics. The Kojima area has become a tourist spot visited by about 150,000 people annually.

Shops with highly skilled makers have gathered here. They manufacture products that can be made only in the Kojima area said Hisao Manabe, 64, the president of Japan Blue Co., which operates a shop near the entrance to the street. The first domestically manufactured jeans were made and sold in 1965 by Maruo Hifuku, the predecessor of today’s Big John.

Cotton farming has been widespread in the Kojima area since the Edo period (1603-1867). Beginning in the Meiji era (1868-1912), many sewing factories were concentrated in the area. As a result, many companies here entered the jeans manufacturing industry. They include a maker of school uniforms based in the Kojima area with the highest market share in the nation.

Shinsaku Sugiyama, a professor emeritus of brand strategy at Shujitsu University, said: “In the Kojima area, there were companies making highly durable school uniforms with thick fibres. So there were machines capable of sewing thick denim fabrics and skilled craftsmen who could use the machines.”

Sugiyama, the author of the book “Nippon Jeans Monogatari” (Tales of Japan-made jeans), believes such factors contributed to the Kojima area’s development as a production site for jeans. However, the Ajino Shotengai shopping street that was the central part of the Kojima area gradually declined, partly because JR Kojima Station was newly built about one kilometre from the area in tandem with the opening of the Seto Ohashi bridge in 1988. In the latter half of the 2000s, 70 per cent of the about 70 shops in the street closed.

To overcome this situation, local makers including Manabe and the Kojima Chamber of Commerce and Industry, among others, set up a council to promote the Kojima Jeans Street in 2009. The council called on about 40 companies that have factories or other facilities in the Kojima area to open shops in the vacant spaces in the street.

At that time, only two shops in the street sold jeans. Many people were negative about the plan, saying it was impossible that many people would gather there given the circumstances. Some of the property owners of the vacant shops were reluctant to lease them.

Taxis bearing jean patterns over the entire body of their cab operate in the area. In 2015, the Michelin Green Guide Japon, a guidebook issued by Michelin of France, introduced the Kojima area as a key place for jeans in Japan. Since then, a sizable portion of the visitors has been foreigners.

Because there have been times when jeans made in the Kojima area struggled to compete with lower-priced foreign products, an urgent task is getting tourists to spend a longer amount of time in the area and increasing the percentage of repeaters among visitors.