One dead, 4 injured in sleeping coach accident in Vietnam 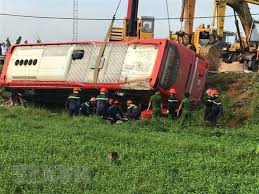 One has died and four people have been severely injured when a sleeping coach, carrying some 20 passengers, overturned in Vietnam’s central Ha Tinh province, early Wednesday morning.

A 29-year-old local man died at the scene. Four foreign passengers, who are Malaysian and Lao citizens, were confirmed safe.

The coach lost control in Ha Tinh’s Huong Son district, at around 4.00 a.m. on Wednesday, when it was on the way from  central Nghe An province to Laos, local authorities were quoted as saying.

In the first nine months of this year, 12,675 traffic accidents occurred in Vietnam, killing 5,659 people, severely injuring 3,633 people and lightly hurting 5,986 others, according to the country’s General Statistics Office.