Online travel booking in Arabian Gulf Area will double by 2023 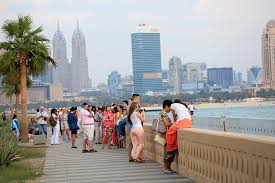 According to new research, the online travel market in Arabian Gulf is set for a boom driven by a young and tech-savvy population, increased internet connectivity and high smart phone penetration. It is projected to grow at least 20 per cent every year for the next five years, the region’s e-travel business is set to hit $15 billion (Dh55bn) by 2023. These travellers have high expectations, demand personalised offers and do extensive online research for Gulf before purchasing, said Anthony Hobeika, chief executive at MRP.

The online travel business in Gulf is expected to rise 140 per cent between 2019 to 2023 from current levels, MRP estimates. The market remains relatively untapped compared to global growth. The online travel sector in Gulf accounts for 5 per cent of the GCC travel market compared to the worldwide average of 12 per cent.

Potentially, this could mean a boom in the e-travel industry, which may log in 2.5 times growth. The digital infrastructure in the region is improving with internet connectivity rates in the GCC crossing 90 per cent in countries such as the UAE and Bahrain, while rapidly expanding in other demographic heavyweights like Saudi Arabia.

The smartphone penetration in the GCC for Gulf stands at more than 75 per cent, which is among the highest in the world. Smartphones are the most popular devices for researching travel offers online, and the mobile travel market is expected to further expand in the GCC.

According to the report, as a result of the digital infrastructure in Gulf, the travel industry of Arabian Gulf is undergoing massive changes. Now the consumer appetite has changed from offline to online booking.

The governments in the GCC are promoting tourism in the region and have identified the sector as a major part of their long-term visions for economic growth, both from leisure to business travel as well as foreign and domestic travel.