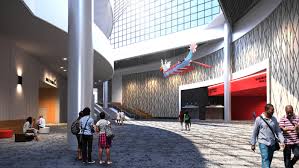 Construction crews are nearing the final stages of a $40 million renovation project at the Oregon Convention Center.

Crews have been renovating the building’s interior, as well as some exterior locations, for more than a year.

Much of the interior work was done with the Pacific Northwest’s natural beauty in mind.

For more than a year construction crews were renovating Oregon Convention Center and it has almost neared the final stages o fa  $40 million renovation project.

Convention Center Executive director Craig Stroud said that the  ceiling that a topographic map of the Cascade mountain range flipped over and protruding down from the ceiling.

In the renovated Oregon ballroom the unique ceiling is a big draw with more than 1,000 individual pieces making up the ceiling which emulates a forest canopy if someone looks up.

Each one of the thousand ceiling elements is individually suspended and hung. There was no playbook on how to do that and it was invented.

There is a new grey speckled carpet throughout the center with color in certain places and the new wallpaper is designed to look like trees in a forest as well.

The renovation of the convention center happened at a critical time and the pieces for increased convention business in Portland have slowly been coming together over the years.

There will be more hotel rooms, increased flights to Portland International Airport, and increased awareness about Portland’s unique identity.

The projected is expected to finish by October.