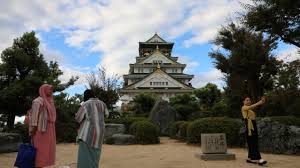 Osaka, Japan’s “second city,” is winning against Tokyo to draw foreign tourists. This inbound tourism to Osaka surged five-fold between 2012 and 2017, faster than visits to Tokyo, as the city lured low-cost carriers and promoted itself as a base to visit the 25 World Heritage sites in nearby Kyoto and Nara.

Previously, the developers and retailers scrambled to build new hotels, expand floor space, and install cashless payment systems like AliPay and WeChat to keep up with the sudden influx of big-spending tourists, mostly from China.

But tourism is entering a new phase now, where instead of loading up on luxury brands, visitors want to spend more on services like makeup consulting, maternity goods, and other cheaper items.

The businesses expect that to become the norm – and to provide a permanent boost to the economy of the Kansai region around Osaka as the city prepares to build a large casino resort. The success of Osaka, long overshadowed by Tokyo and dismissed as gritty and chaotic, has caught analysts by surprise.

The city’s compact layout and food culture have proven a hit with Asian tourists, and that has created new opportunities for start-ups, social media marketing consultants and foreign property developers. Osaka and its surrounding cities may become the most visible example of how Prime Minister Shinzo Abe’s economic policies have changed Japan. The foreign visitors to Osaka hit 11.1 million in 2017, a five-fold increase from 2012, making it Japan’s fastest-growing inbound tourist destination, government data show. CBRE’s Yamaguchi says that foreign visitors to Osaka could reach 26 million per year by 2030.

The tourism spending in the Kansai area, which includes Osaka, Kyoto and Nara, more than tripled to 1.3 trillion yen ($11.64 billion) in fiscal year 2017 from fiscal 2013, adding an average 0.2 percentage point to the Kansai area’s economy for the past three fiscal years.