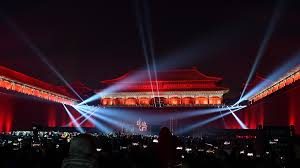 Palace Museum’s Lantern Festival night tour is attracting not only to Chinese tourists but also to international tourists. As the tourism industry is attempting to find new sources of growth in exploring cultural tourism, this festival becomes a part of Beijing’s Lantern Festival celebration.

As the event attracted public attention at the end of the Spring Festival holidays, the idea of night tourism also became a hot topic. Analysts noted that the successful event will be a positive example to those who are trying to boost industry growth.

The night tourism is not a new thing in China, and many cities have launched similar themed events. According to tourism data from the Spring Festival this year, night tours were held in other Chinese cities.

A night tour of the Jinjiang River in Chengdu, Southwest China’s Sichuan Province attracted about 166,000 sightseers during the seven-day Spring Festival holidays. The programme displayed the beautiful vision of the river described in a famous poem of Tang Dynasty poet Du Fu with color lights shows, local media reported.

Similar cultural tourism programs were offered in characteristic ancient towns and central cities, according to analysts. A key factor in successful night tour programs is developing unique and interesting themes.

The innovation by the Palace Museum turned the former imperial palace into a special public resource at a traditional time, Li Mingde, a former vice president of the Beijing Tourism Society, told the Global Times on Wednesday.

Li said that the theme needs t be developed on the basis of the original object. In this case, the light show focused on the ancient architecture. Another important factor in cultural tourism is the market performance, analysts said.

The achievement of the model is also largely beneficial, but the development of the Chinese night tour industry is still very uneven and industry clusters need to be formed.

The creative ideas are the most important factor in cultural tourism, and they can’t be copied, Zhang Lingyun, director of the Tourism Development Academy at Beijing Union University, told the Global Times on Wednesday. The Palace Museum’s success was largely due to its unique and ancient imperial architecture and the special nature of the occasion, Zhang said.