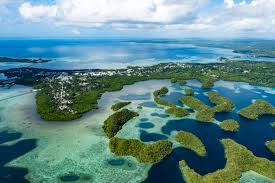 In response to the reduced number of Chinese tourists over the past year as a result of Beijing imposing strictures on Chinese travel agencies, the owner of Palau Pacific Airways, the Sea Passion Group, notified the country’s national legislature on July 13 that it will be ceasing all flight operations because the Chinese government had made Palau an illegal tourist destination.

The company said it is no longer able to compete in Palau’s low budget tourism market under the current political and economic circumstances.

In November of last year the China National Tourism Administration ordered Chinese tour companies to suspend tour groups from booking trips to Palau and the Vatican, as a means to pressure the countries into breaking ties with Taiwan. The tour agencies will be reportedly be fined if they book trips to Palau.

However, the president of Palau Tommy Remengesau Jr. steadfastly refused to break diplomatic ties with Taiwan, explaining that he would rather be given the option of recognizing both China and Taiwan, to establish ties with both countries.

As a result of China’s suspension of tour groups, the number of Chinese tourists visiting Palau has plummeted by nearly half compared to the previous year.

The local media reports that for July and August this year there were almost no reservations for flights on Palau Pacific Airways, or the group’s Sea Passion Hotel in Koror by Chinese tourists.  Palau Pacific Airways operated a very popular round-trip route from Hong Kong to Koror.

Despite drastically reducing round-trip fares for the flights between Koror and Hong Kong from US$800 last year to US$300 in January 2018, there has been little impact to encourage more tourists to visit.

As a result of the heavy losses the Sea Passion Group looks to be cutting its losses by closing down its airline business.