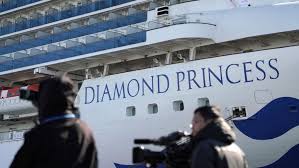 All the passengers and more than half the crew from the infected Grand Princess cruise ship have now left the ship, Princess Cruises informed early Tuesday.

The Grand Princess cruise ship ultimately departed the Port of Oakland in California and moved to a remote dock in San Francisco, where it will temporarily stay for the remaining crew members to complete a 14-day-quarantine.

The ship docked in Oakland on March 9 with 3,500 on board after reporting 21 coronavirus cases. The CDC has since said the cruise ship resulted in 28 U.S. cases of the virus.

More than 500 of the 1,100 crew members disembarked over the weekend and went home.

“We can confirm that Grand Princess is no longer docked in Oakland and is now anchored in the San Francisco bay. All passengers have disembarked. We will share additional information as soon as we can,” the cruise line stated in a message Monday shared by Princess spokesperson Alivia Owyoung Ender.

Princess said in a press release Sunday night: “The crew members disembarking undergo the same health screenings as guests from the ship, which continue to be managed by HHS and CDC health authorities. Crew members who are ill (for any reason) or symptomatic will not be allowed to fly via chartered aircraft. Crew members who are not symptomatic but from whom no charter flight is currently available will stay under quarantine on the ship. Those requiring elevated care will be moved to land-based medical facilities or HHS alternate care sites, depending on their condition.”

Princess had originally intended to keep all crew members not requiring hospitalization on the ship after it left the port, but the cruise line changed course as the situation evolved.

The plan to depart the Port of Oakland was made in conjunction with The U.S. Department of Health and Human Services (HHS), the California Governor’s Office of Emergency Services and the U.S. Coast Guard, according to a news release by Robb Mayberry, a public information officer for California Governor’s Office of Emergency Services.

“Upon the ship’s departure, the Port of Oakland site will be fully remediated and decontaminated by immediately removing temporary structures and pressure washing the entire site with a bleach solution to disinfect it,” Mayberry added.

Passengers who disembarked the ship last week were taken to military bases to complete their 14-day quarantines.

Cruise ship passengers under federal coronavirus quarantine said they didn’t have enough food, medical attention and were being housed in unsanitary conditions.

Michelle Saunders and her 83-year-old grandmother, both from Illinois, have been waiting for medical attention and other basics since they were among the 2,000 evacuated from the ship.

At Dobbins Air Reserve Base in Georgia no one came by to check their temperature for nearly two days, Saunders told the media on Saturday – a standard protocol they were promised to help monitor for infection.

Food was not delivered to their room for more than 12 hours after their arrival, she said. Their room had no towel and one small bar of soap, and she has been told there is no more, despite the constant public health reminders to wash hands.