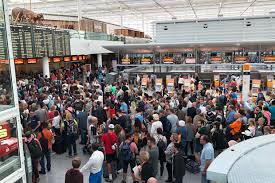 At the Munich airport, thousands of passengers were stranded after a person managed to enter the ‘airside’ area by taking the wrong way through an emergency exit.

The airport took to twitter and wrote that according to the information currently available, a person has probably entered the clean area of Terminal 2 through an emergency exit door from the unclean area.
Therefore, police measures were currently in progress.

Lufthansa said that Terminal 2 and areas B and C of Terminal 1 are currently closed. As soon as they get further information they will be informing the passengers through the known channels.

Almost hundreds of flights are being operated through the Terminal 2 of Munich airport each day. In a normal day around 130,000 passengers pass through Munich which is the eight-busiest airport in Europe.

A passenger quipped that no official information was given so far and could the airport authority inform the people standing outside passport control gates since 8 am in the morning.

Those passengers who were security screened were asked to return and go through the security check for a second time.

Another passenger complained about the disruptions saying that they needed water and food and wanted to get on their flights.

Dozens of flights by Lufthansa was cancelled and almost all departure was showing as delayed.

The arriving flights were allowed to land and the airfield was filling quickly and diversions soon started.