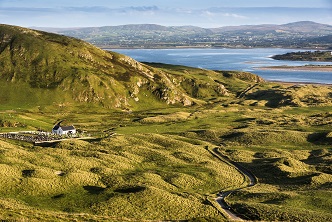 Tourism Ireland in Britain has teamed up with Sky Sports Golf in its latest campaign to promote our world-class golf. The month-long promotion has been designed to inspire British golfers to come and visit Ireland and to celebrate the fact that The Open will take place at Royal Portrush in 2019.

A series of five different videos – filmed here this summer – will be hosted on SkySports.com; and articles about our great golf will also feature on the website. The videos will be promoted on the social platforms of both Sky Sports and Tourism Ireland, including Facebook and Twitter, and will be seen by an estimated 4 million people across Britain.

Sky Sports Golf pundits Paul McGinley and Nick Dougherty star in three of the videos. Our own Ryder Cup hero Paul takes an in-depth look at some of his favourite golf clubs in the North West – including Ballyliffin, Portsalon and Rosapenna. Golf fans will see him describe the courses, as well as the local area, highlighting just what makes them, and this part of Ireland, so special. Nick talks about two of his favourite courses in Northern Ireland, Royal County Down and Royal Portrush. The final two videos feature interviews with players and fans at this year’s Irish Open in Ballyliffin.