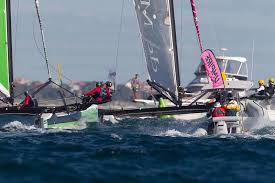 Known as the ‘Formula 1 of sailing’, the moth class is one of the fastest and most exciting forms of sailing thanks to an innovation pioneered in WA.

Up to 200 of the world’s best will descend on Mounts Bay Sailing Club in Crawley from December 9-18,

“With up to 200 competitors and their families descending on Perth, the championships will provide a boost to WA tourism with some terrific world-class sailing competition,” Sport and Recreation Minister Mick Murray said.

Moths can be regularly spotted on the Swan River – noticeable by their distinctive sailing style where the hull lifts out of the water, allowing the vessel to hydrofoil and reach speeds of up to 30 knots.

The ‘foil’ innovation was developed by WA’s Garth Ilett, John Ilett and Brett Burvill in Perth in 1999. This year’s championships mark the 20th anniversary of the hydrofoil development for the moth class which inspired the development of similar craft, even those competing in the America’s Cup.

The championships will be video streamed live to an international audience, showcasing the picturesque Swan River and Perth skyline.

Tags: Perth tourism to shine with 2019