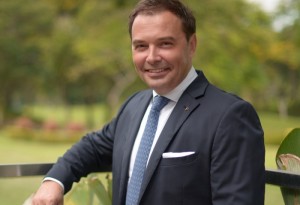 Eric Piatti has been appointed by Dusit International as the general manager of Dusit Thani Laguna Singapore.

This will be the  first Dusit-branded property within the country  scheduled to open in the first quarter  2019.

He will be responsible for overseeing the pre-opening and ongoing operations of the new resort located within the Laguna National Golf & Country Club.

Dusit Thani Laguna Singapore will comprise 198 tastefully-decorated rooms and suites along with  eight Golfer Chalets with their own private pools, in a prime location which is ten minutes by car from Changi International Airport and 15 minutes from downtown. There is also a direct access to two championship golf.

He is delighted lead this stunning resort and introduce Dusit’s Thai-inspired, gracious hospitality to the country which is ideally positioned to meet the needs of golfing enthusiasts, leisure travellers, and MICE clientele.