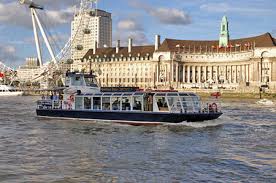 The ferries in London used by commuters and tourists in London city are spewing out pollution equivalent to hundreds of buses and trucks every day. The carbon emission by the London ferries creates the massive air pollution. But these are not enough policed by new emission regulations.

While on the contrary, the cruise ships docking at places like Tower Bridge pump out as much toxic nitrogen oxide gases and particulates as nearly 700 lorries each.

These passenger and tourists vessels – alongside the tour boats, container ships and tugs that use the river every day – can use filthy fuel and engines because they operate under the same rules as trawlers in the North Sea. The boats can therefore emit up to 100 times the level of Sulphur oxide gases (SOx) permitted for cars, vans and buses. These lax standards mean river traffic is far from complying with the targets set by London’s low emission zone, let along the ultra-low emission zone (ULEZ) coming into force next year. The decades of reform have seen increasingly tight regulations placed on cars and vans, culminating in the London mayor’s ULEZ – which will stretch to the North and South Circular roads by 2021.

While the contribution of tourist boats to the air pollution crisis of London is small compared to that of road vehicles, campaigners and experts have warned that river traffic is being left behind – despite the threat it poses to Londoners living near the River Thames.

Some London boats, such as the Thames Clippers – high-speed catamarans that carry commuters and sightseers – use gasoil with SOx levels comparable with those found in road diesel. Compared to a truck operating under the latest European diesel standards, the figure is closer to 20 times higher.

The measures like ULEZ are intended to keep vehicles that do not meet the strictest emissions standards out of the city. The data suggests 9,500 Londoners currently die prematurely every year due to air pollution, and scientists say the lethal cocktail of gases and particles is having far-reaching effects.

A Department for Transport spokesperson in London said that the shipping in London is an international industry, so it is entirely appropriate that there is a global approach to regulating shipping through the IMO. Belgium now has a hydrogen powered river craft operating (hydroville), and the Netherlands and other European inland waterways are increasingly electrifying river traffic.

A switch to low-sulphur fuel combined with particulate filter and emission-reducing catalysts would virtually abolish air pollution from boats being used in cities, which are working for daily commuting and tourism.