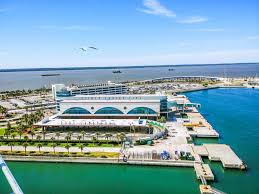 Port Canaveral is one of Central Florida’s greatest assets when it comes to cruise-related tourism and the transportation of bulk commodities such as petroleum, salt and other resources.

The sea hub in Central Florida , which is the second-busiest cruise port in the world, has an economic contribution throughout the state of Florida in the past year totaling $3.9 billion, producing 32,650 jobs and $1.3 billion in wages, based on a Business Research & Economic Advisors study, which also noted that the activity across all business lines resulted in $1.94 billion in direct impact in the Central Florida economy, which contributed to the direct employment of more than 17,200 workers who received $729.4 million in wages.

The cruise segment of Port Canaveral alone generated $1.3 billion in economic impact and supported 12,964 regional jobs paying $516.6 million in annual wages. And its cargo business surpassed 6.5 million tons, generating $9.3 million in revenue for the port. Because of this growth, port officials shared a brief update on some of the upgrades happening at the sea hub heading into 2020.

The construction is still on schedule at Cruise Terminal 3, a new $163 million facility dubbed “Launch Pad.” This new facility will allow the world’s second-busiest sea hub to accommodate mega cruise ships, which will bring more visitors to the port and benefit the overall region. The 188,000-square-foot passenger terminal, also known as Terminal 3, will be home to Miami-based Carnival Corp.’s new Mardi Gras cruise ship, the largest in the company’s fleet. Mardi Gras will carry up to 6,500 passengers when it begins sailing in 2020.