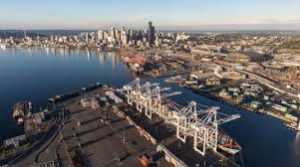 The Port of Seattle welcomed 1,114,888 million revenue passengers through its cruise terminals in 2018. Last year too they had crossed the one-million passenger mark.

The port is expected to maintain its growth in 2019. Royal Caribbean Ovation of the Seas – a 4,180-passenger vessel will be largest on the west coast to cruise through. Norwegian Joy, a 4,000-passenger vessel too will touch base at this port.

The cruise industry from Seattle to Alaska started in 1999 with just six sailings. It is now a successful business valued over U.S. dollar 501 million.

Seattle is the busiest port on the west coast of the USA. It is also considered as USA’s capital for cruises.

Seattle has two cruise terminals. One of them is Bell Street Pier at Pier 66 (2225 Alaskan Way Seattle, WA 98121) which is the homeport for Norwegian Cruise Line and Oceania Cruises.

Pier 66 is on Seattle’s downtown waterfront near Pike Place Market, the Space Needle and other major city attractions.

Pier 91 offers connections to the city’s power grid, reducing air emissions and helping Seattle strive to be the greenest port in the nation.

Tags: Cruise, The Port of Seattle