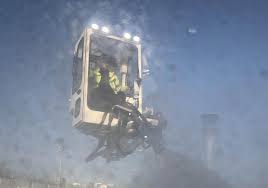 A significant layer of snow accumulated on the wings of the aircraft which a cabin crew member reported when the aircraft door was closed after boarding was complete.

After following several aircraft incidents in the past, the crew was aware that an aircraft should not attempt to take-off with any snow or ice on the wings.

According to the Civil Aviation Authority (CAA) the plane was already on the runway when the pilots abandoned the planned departure.

In the latest report from the Confidential Human Factors Incident Reporting Programme the sequence of events is explained in the startling detail in the latest report. The CAA scheme encourages the airline staff to raise safety concerns with anonymity.

Cabin crew assumed that other crew must be aware of the snow and requested de-icing.

No mention was made of de-icing the aircraft during the captain’s pre-flight announcement to the passengers,  even though it is customary to warn of a short delay while the wings, tail and fuselage are sprayed.

The cabin crew member wasn’t sure if they were going to it and thought that the experienced pilots were aware of what should be done.

When the escape slides are primed to deploy when a door opens the doors were armed for departure and the crew took positions in the cabin for safety demonstrations.

The flight crew locked the flight-deck door and started the engines during the safety demo, this was when the cabin crew got to know that they had no intentions of de-icing the aircraft.

After the safety demonstrations had finished the aircraft began the short  taxi to the runway. The planes were at the holding point and was ready to enter the runway for take-off as soon as the standard ‘cabin secure’ message had been passed to the pilots.

Before beginning to secure the cabin, the SCCM [senior cabin crew member] was informed that there was a significant layer of snow on the wings and that it would be a good idea to let the pilots know.

After examining the wings they agreed and called the pilots, the aircraft actually  on to runway, and the planned take-off was then abandoned. The aircraft taxied off the runway and parked in a holding area.

The passengers were informed what was happening and the first officer or the  co-pilot came out from the flight deck and asked two passengers sat by the wings to get up from their seat while they shone a torch light over them.