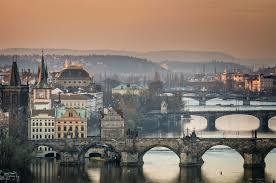 Prague attracted almost 7.9 million visitors in 2018. It is a 3.2 percent increase compared to 2017. The foreign tourists accounted for 6.67 million. The number of guests from abroad increased by only 1.7 percent, while Czechs increased 12 percent.

Last year the number of nights spent at Prague’s accommodation facilities reached almost 18.26 million, which is 1.1 percent more than in the previous year.

More than 2 million people arrived in the capital in the last three months of the year, including 1.67 million foreign guests.

The overnight stays increased by 0.6 percent, with foreign tourists dropping by 1.2 percent, while Czech visitors to the metropolis grew by almost 14 percent. Across the entire Czech Republic, the number of guests in collective accommodation establishments reached 21.3 million in 2018. It was by 1.3 million more than in 2017, which was an increase by 6.4 percent, according to the Czech Statistical Office (ČSÚ).

The total number of nights spent by guests in collective accommodation establishments reached 55.5 million, which was 2.3 million or 4.3 percent more compared to 2017. Germany remained to be the most important source of visitors to the Czech Republic in 2018; in total, 2 million guests came from there, up 3.6 percent. Slovakia ranked second with 735,000 arrivals, up 7.8 percent, and Poland remained the third; with 620,000 guests, up 7.8 percent. The number of arrivals from China increased the most of any major country, up 26.5 percent. One issue in tourism in Prague and other major cities is accommodation in private apartments.

The hoteliers in Prague have been complaining about short-term accommodations provided through applications such as Airbnb. Recently, the Prague City Council, a coalition of Pirates, Praha sobě and the United Force for Prague, has been working with Airbnb to cooperate in exchanging information. Airbnb will also be collecting accommodation fees and turning them over to the city, which will amount to millions of crowns per year.

Over time, this solution could be extended to other similar services. Short-term accommodation in the city has led to criticism for disturbances, non-compliance with the rules of the owners of dwellings and impact on the housing market, the City Hall press release stated.