Premier Inn: Fire broke out at a hotel near England’s Bristol 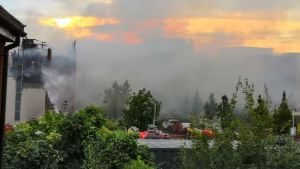 Huge fire at the Premier Inn in Cribbs Causeway broke out earlier on Wednesday afternoon. There are a number of fire crews on scene at the hotel near the M5.

A fire service spokesman said that at 1.27pm, crews from Southmead, Avonmouth and Temple were called to reports of smoke issuing from a commercial property on Catbrain Lane in Almondsbury. On arrival, crews located a fire on the third floor.

The spokesman said that six firefighters in breathing apparatus are currently using two high-pressure hose reels and two 45mm jets to tackle the fire, while conducting a thorough search of the building. The residents living nearby are being urged to close their doors and windows where possible as a result of the smoke. The Fire Service said a third turntable ladder has now arrived at the scene along with Avon and Somerset Police.

Cribbs Causeway, the A4018, is currently closed in both directions between Clifton Rugby Club and Lysander Road. Buses are also being diverted.

Police at the scene are warning bystanders they “expect the roof is going to collapse”. Those working nearby said they had seen ambulances at the scene as well as “loads of smoke”.

Fire crews from Southmead, Avonmouth, Temple, Bedminster and Kingswood are now tackling the blaze. The smoke is visible from Totterdown in Bristol.

A4018 Cribbs Causeway remains shut in both directions between Clifton Rugby Club and Lysander Road.