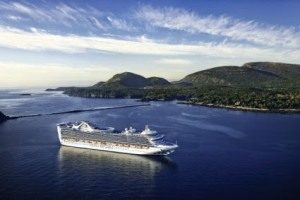 Recognized as a destination leader, taking guests to more than 380 worldwide ports of call, Princess Cruises has been awarded three first-place accolades in Cruise Critic’s fourth annual “Cruisers’ Choice Destination Awards.” Based entirely on consumer ratings, the awards name the world’s most popular cruise destinations – as well as the best cruise line’s to visit each region. In the Large Cruise Ship Category Princess Cruises was named Top Cruise Line in Australia & New Zealand, the Baltic & Scandinavia and the U.S. & Canada.

“It’s an honor to be recognized as the top cruise line to so many bucket-list destinations in this Cruise Critic destination awards,” said Jan Swartz, Princess Cruises president. “Our dedicated team of destination experts, with decades of experience planning itineraries and shore excursions, offer our guests what we believe are the best in the cruise industry.”

One of the best-known names in cruising, Princess Cruises was founded in 1965 with a single ship sailing to the Mexican Riviera. Today, the cruise line is a global premium cruise line and tour company operating a fleet of 17 modern cruise ships, carrying two million guests each year on more than 150 award-winning itineraries to destinations around the globe.

Cruisers interested in U.S. & Canada cruises can choose from several voyages during the upcoming Canada & New England season onboard Princess MedallionClass™ ships Caribbean Princess and Regal Princess. Royal Princess, also a MedallionClass ship, is currently sailing the west coast with voyages to Alaska, the Mexican Riviera and the California Coast. More details regarding itineraries to all recognized destinations, including current promotions, can be found at www.princess.com.

Cruise lines awarded in this year’s awards stood out among all of the lines that sail in each region, receiving the highest ratings from cruisers who sailed with the line over the past year and shared their experiences on Cruise Critic.

“For most travelers, the decision of where to cruise is made before they think about all the other pieces of the cruise planning process,” explains Colleen McDaniel, editor-in-chief of Cruise Critic. “And for those looking for incredible cruise destinations and experiences, there’s no better way to narrow your options than by seeing which destinations and cruise lines are rated most highly by cruisers who have already been there, done that.”