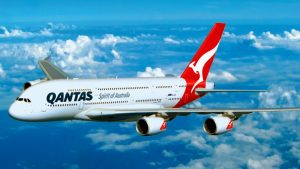 Qantas Airlines is operating an historic non-stop flight from Australia’s Darwin to London’s Heathrow Airport as travellers struggle to return to the United Kingdom amid the coronavirus pandemic. Its flagship Sydney to London service usually flies via Singapore but due to travel restrictions on international air travel it was forced to find an alternative route.

The Australian carrier will temporarily operate its Sydney to London flight via the capital of Australia’s Northern Territory, where the Airbus A380 plane will stop off to refuel.

The flight to the United Kingdom’s largest airport from Darwin will take 16 hours and 45 minutes – believed to be the first non-stop flight between the two destinations.

The temporary airline route will only operate this week, before Qantas suspends all international flights until May 31 at the earliest.

It comes after NHS nurses accused the Government of “turning their backs” on them, as they were left stranded in Australia following numerous flight cancellations. Laura Mclaughlin, who has lived in Sydney for three years, organised a group of over-50 NHS staff who want to return to the United Kingdom and rejoin the health service in response to the COVID-19 pandemic.

She said she had been in contact with former colleagues in the United Kingdom about returning to work, who said they are “so short-staffed” they need as much help as possible.

Ms Mclaughlin said she had managed to secure a seat on the flight from Darwin to Heathrow, but there were a number of NHS staff, including doctors and physiotherapists, who are still searching for a route back to the United Kingdom.